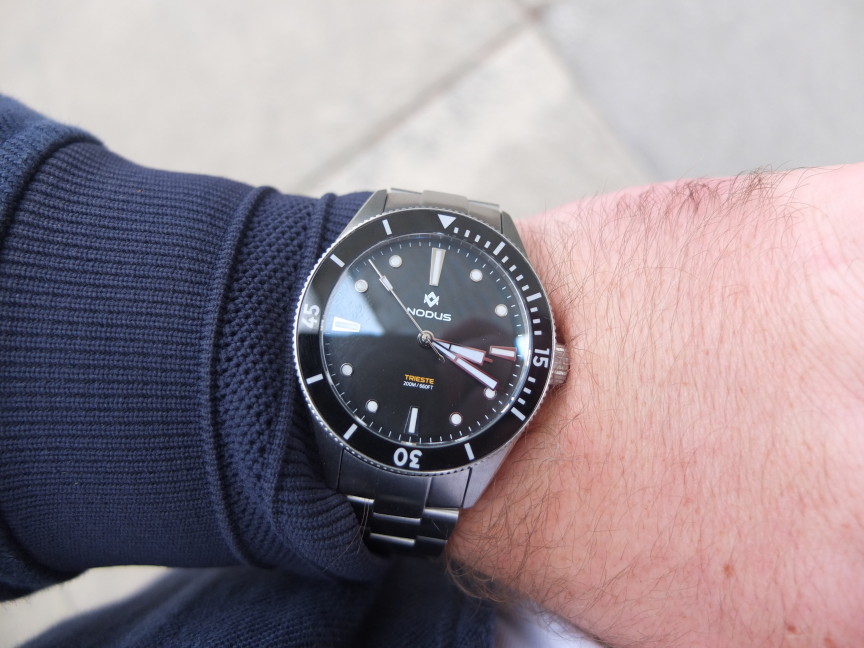 There is good reason why dive watches, as a category, are likely (we must confess, we haven’t looked at the numbers) the best-selling and most popular watches. The prototypical dive watch has, together:

Any new player in the dive watch market has to tick these three boxes in addition to carving out its own particular niche, in order to be a commercial success. Today we put the Nodus Trieste, the first watch from Los Angeles start-up brand Nodus, to the test. 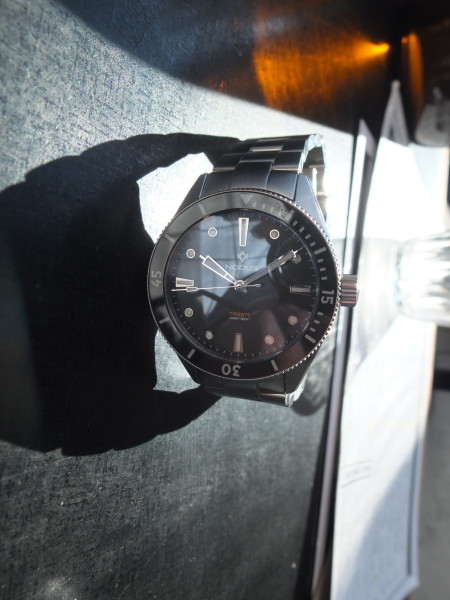 The Trieste dial draws heavy inspiration from the Blancpain Fifty Fathoms Bathyscaphe, in terms of having trapezoidal indices at the cardinal points (but rectangular lume) and dots marking the hours elsewhere. Like the Bathyscaphe, the dots are a bit smaller than we’ve come to expect from dive watches (read: smaller than Submariners and Black Bays), which creates more negative space on the dial. A simple printed minute track surrounds a simply executed matte black dial.

So while the dot indices are smaller than the norm, the trapezoidal indices appear longer, even more so with the marker at 12, which creates a bit of an “in and out” feel for the watch. This “in and out” feel does not derogate from the legibility of the dial, with the hour hand going close to reaching the cardinals and the minute hand reaching the centre of the dots.

Each hour marker contains lume plots surrounded by a stainless steel casing. The BGW-9 lume is serviceable and long lasting.

I’m going out on a limb here, but I’d say the handset of the Trieste is the most eye catching and unique element of the watch. The hands are divided into two parts and are fan shaped, starting from a narrow centre and gradually getting thicker as they extend out to the edges of the dial. A small steel stick points out from the end of the “fan”, which, in the case of the minute hand, reaches the minute track. The handset is a bit of a “love-it-or-hate-it” design, but I commend Nodus on taking a risk and adding something a bit different.

The Trieste is subtly branded, with the Nodus logo and name sitting below 12, and an orange “Trieste” followed by white “200M/660FT” on the line below. The sapphire crystal is slightly domed, which underside has AR coating. 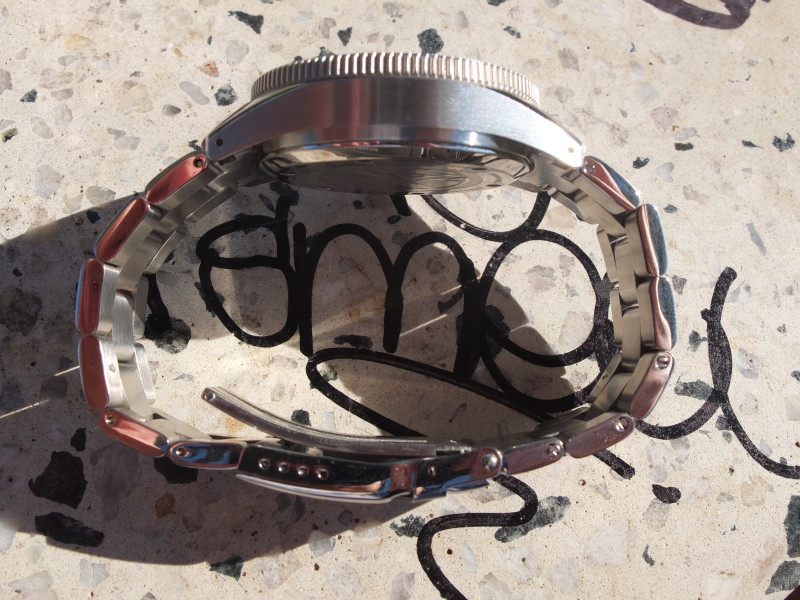 The Trieste case comes in 6 varieties, each with the same dimensions 41mm (width), 50mm (lug to lug) and 12mm (height). The bezel is available in a black, red or blue variation and the case is either stainless steel or coated in black PVD.

Everyone has a different idea of how they want a diver to feel on the wrist, but for me, the proportions are spot on. The lugs contour along the shape of the wrist and it’s a comfortable wear. 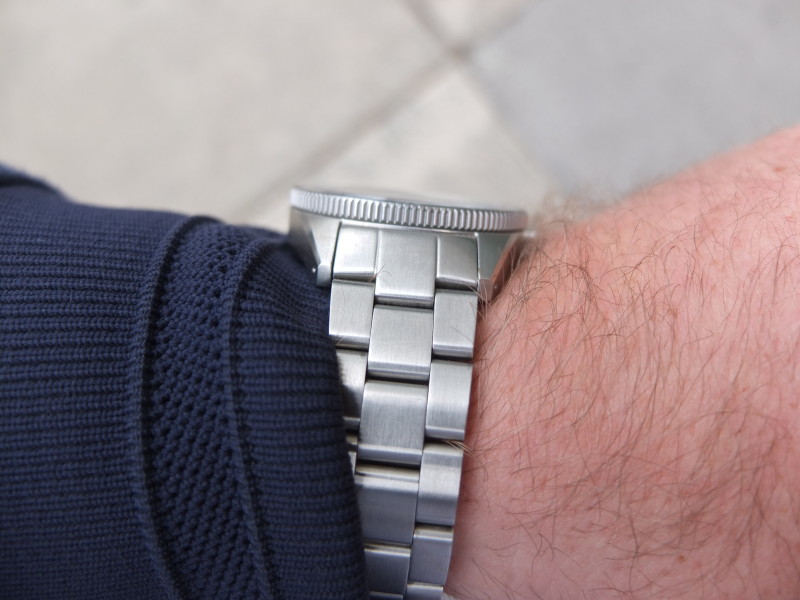 In terms of the bezel, the sapphire bezel is a real winner. It’s 120 clicks and the coin edge feels solid, with only a little back-play between clicks. While I typically prefer a 60 click bezel, I have no complaints about its quality. Sapphire bezels have a way of catching the light and I enjoyed the juxtaposition of textures with the matte dial and the reflective bezel.

Each piece of text or marker (including each graduation up to 20 min) on the bezel is lumed. On a practical level, this assists with timing at night (or under water), but creates in me a great sense of value and attention to detail. Watches far more expensive than this don’t have a lumed bezel, so it’s nice to get something more than expected at this price point.

The triangle absent from the dial makes an appearance at 0/60 on the elapsed countdown bezel and the cardinal points are represented by 15, 30 and 45.

Otherwise, the case is brushed with a nice polished chamfered edge running on the outside of rather straight lugs. The screwdown caseback is a simple affair that has an engraved design with both a polished and matte texture. The crown is screw in with the Nodus logo engraved. Again, another nice touch, but I felt just a little wiggle when the crown was screwed out to its second position. 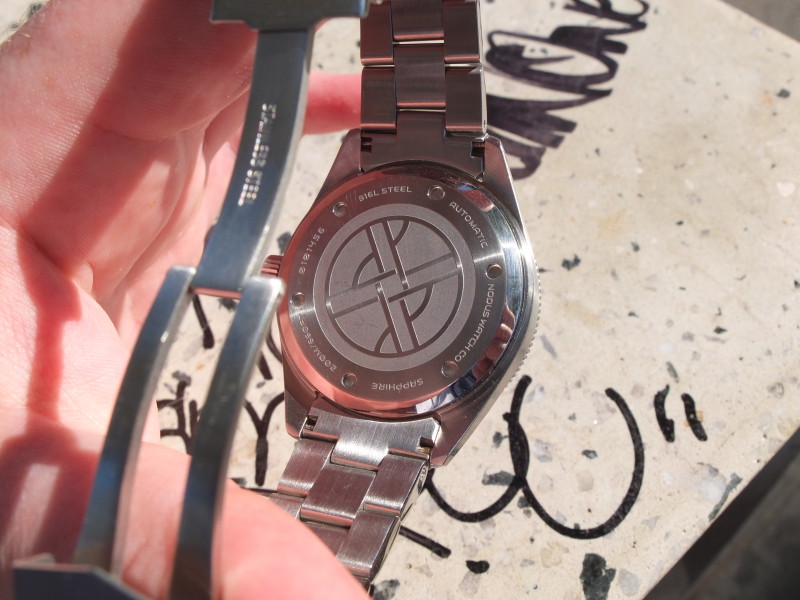 This review sample was shipped with the Swiss STP (1-11) movement, but the Trieste can be optioned with a Seiko NH35A movement to save 150 USD. Both movements are hacking and handwinding and the trade up will give you a couple of extra jewels and hours of power reserve, and a higher beat rate (3 to 4 Hz). Regardless, with the Trieste’s solid caseback, you won’t be looking at the finishing of the movements all too often. It’s nice to have the option of both movements and whichever your choose will serve you unfailingly.

Both movements can be optioned with a date that is positioned at 4.30. There is clearly a demand for dates in watches, but I for one am grateful that this Trieste is the no-date version. 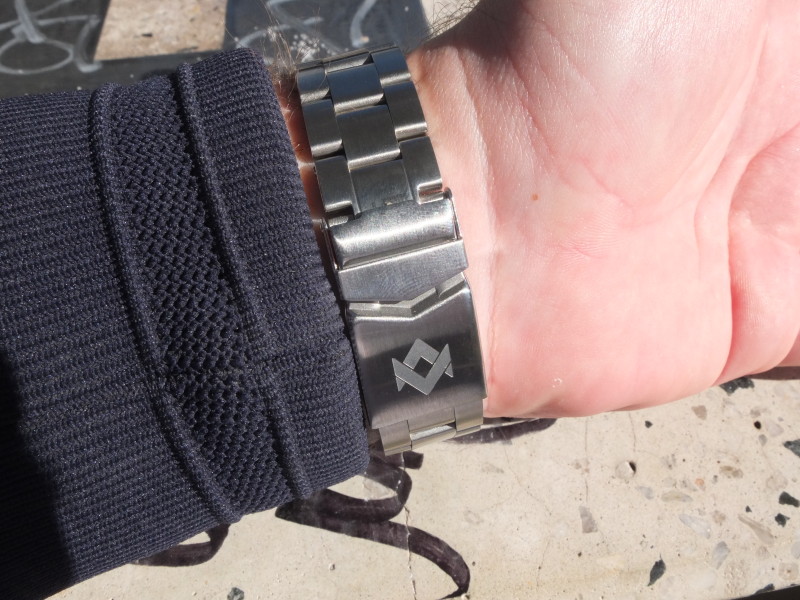 The Trieste was shipped with the bracelet and also a black Tropic Rubber Strap (which can be purchased separately).

The tropic is a 100% vulcanised rubber strap and has a patchwork, almost sailcloth-like topside finish (reminiscent of the strap that comes with the Oris Diver 65). The strap has a 2mm taper from 20mm lugs, and wears quite comfortably. It is soft and quite malleable.

The bracelet, on the other hand is a simple brushed oyster bracelet. Thankfully it has screw in links (pins are the worst) and a simple flip, double lock (with Nodus logo). If you are serious about diving with the Trieste, I’d recommend the tropic strap, since the bracelet doesn’t have a divers extension (but should fit an approx. 8 inch wrist), but it does have 4 micro-adjust holes that came in handy in the Melbourne weather.

I was pleasantly surprised to find that the Trieste has drilled lugs. One of the benefits of being a small brand (I’d imagine) is that you can move quicker and be more attentive to the voices of the market than the behemoths that have multitude steps and bureaucracy to deal with. A simple addition of drilled lugs makes changing straps a breeze and is a huge step up from other competitors.

Names are clearly important for Nodus, with both the name of the brand and the timepiece harkening back to a bygone era.

I’m informed that Nodus is the latin word for “node”, which is the intersection of two paths. Nodus has gone out seeking to emulate that name, by creating watches balancing “quality with accessibility, heritage with modernity, and design with functionality”.

Nodus reassemble the Trieste in Los Angeles, which is no small feat. Nodus tells us that this came about by reason of the production and assembly inconsistencies found when the watches were finally assembled elsewhere. In order to be more confident in their product and to save warranty/replacement costs caused by defective watches down the line, Nodus chose to reassemble in house. A bit has been made about the resurgence of the American watch industry, and while Nodus isn’t yet developing a movement from scatch, any effort in this direction is commendable.

In all, the dial, bezel, case and strap package provided by Nodus ensure that Trieste accomplishes the three goals listed above (legibility, rugged build quality and design) and is a worthy first timepiece for the brand.