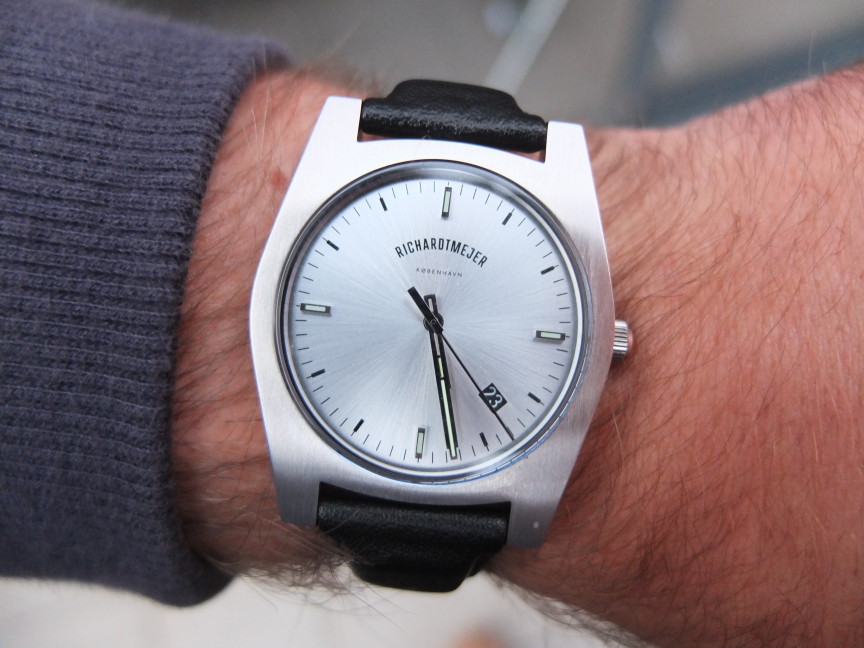 This week, the good people are Richardt & Mejer have provided us with a watch from their Signature collection to test drive. Read on below for our experience with the watch and some more philosophical musings about watches in general.

Forgive us for our somewhat bleak view of parts of the watch industry, but it seems like modern watches often crammed full of complications, from useful chronographs and GMTs, to the not so useful ornate complications like the “open-heart”.

Smart watches are an entirely different concept and are characterised as more gadget than watch. Somewhere in between we have hybrid watches/straps which often bring some of the qualities/functionality of a smart watch into a mechanical watch.

In essence, the modern watch has brands trying to cram more detail, more functionality and more eye candy to wow buyers in what is a fairly crowded market.

But, what you actually require from a watch in the modern world, is two-fold:

Firstly, being able to readily and effectively read the time is an obvious and often overlooked necessity in watchmaking. More dial flourishes and detail distracts the eye from the two to three hands designed to do the primary job of the watch. Often, less is more.

Secondly, phones and most other gadgets tell the time. We are not wont for options to show that the train is running late, again. But, the choice to wear a watch is a personal one and forms a not-insignificant part of ones outward manifestation of personality.

Here’s where the Signature comes in. 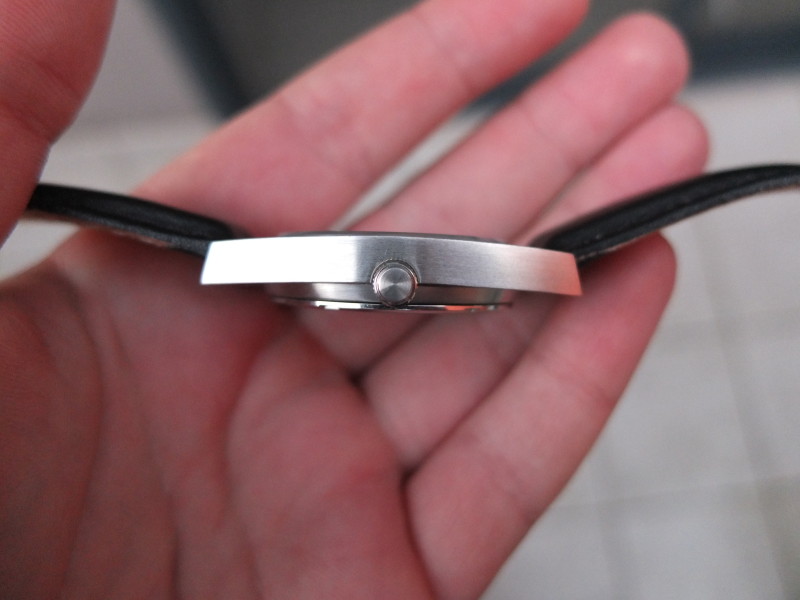 The most striking part of the watch is the case. It is a less curvaceous version of a Tonneau case, with relief in the form of deep, slightly curved cut outs which together form the lugs and allow for the strap to sit neatly against the case. The topside of the case is entirely flat and has a simple brushed finish that’s well executed.

Some would consider that a 38mm width runs too small for a daily wearer. Not in this case. The profile of the watch is brutally flat. You can see that there is the barest of curvature along the 9mm thick case to cater for wrist angle. This flat profile means that only part of the caseback rests against the wrist meaning the watch sits quite high. The crystal is flat and lifts ever so slightly up off the case. 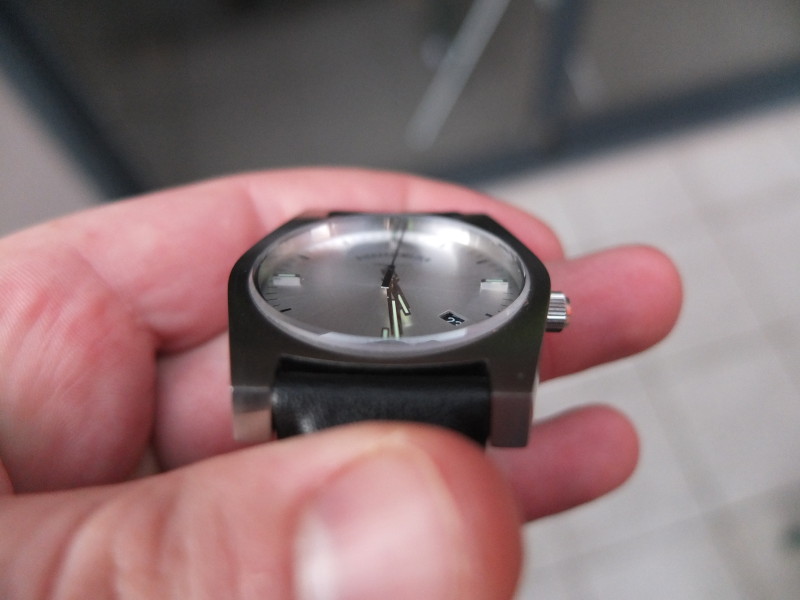 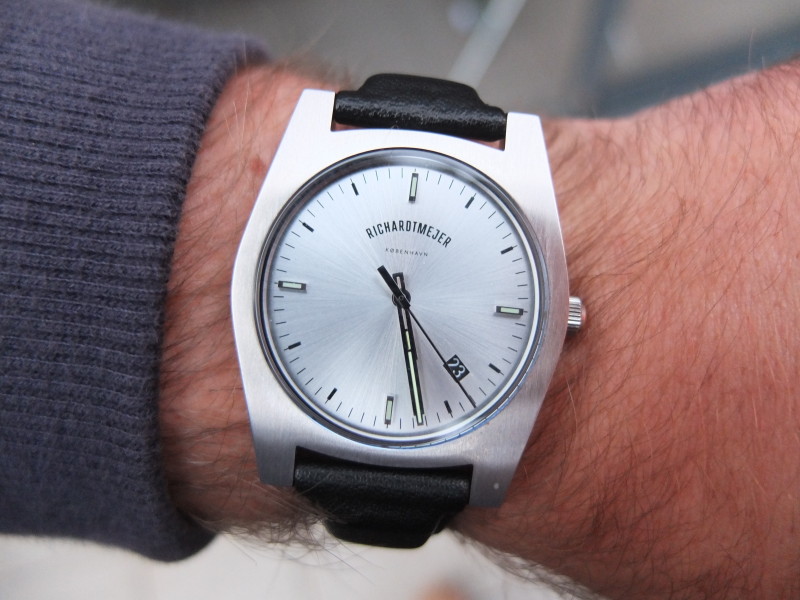 This Signature has a silver dial in a shade almost the same tone of the stainless steel of the case. The silver dial has a light sunray effect that glints in the light.

A simple dashed minute track surrounds the inner workings of the dial, interrupted by printed thick black blocks on the non-cardinal hours. At 3, 6, 9 and 12 are applied steel indices that raise dramatically off the dial. The blocky indices capture the light and add a great deal of depth and texture to the dial.

The Signature makes a bit of a statement with the date, both in execution and location. A 4.30 date is a bit of a talking point in terms of dial symmetry and it is up to you whether the positioning is your cup of tea.

The date cutout has no border and descends (seemingly quite deeply) to a black date wheel. Typically watches with silver dials have white date wheels, so it is clearly a deliberate design choice for the Signature. The black gives a greater depth and shadow to the cutout and again provides a little point of difference from other watches.

The handset of the Signature is actually the sleeper element of the piece. To paint a picture, these are visually reminiscent of skyscrapers with a two tier construction. Simply put, the stick style hour and minute hands are divided into two sections. Starting at the centre of the dial, the hands are skeletonised with an outer metal surrounds and a centre cutout extending through the first half of the hand. The second half of the hand is lume filled, which extends beyond the length of the outer metal surrounds, replicating the syringe hands that can be found on some aviation pieces.

It is a handset that I haven’t encountered before and it is an element that invites the wearer to look a bit deeper, a bit more critically, into the workings of the watch. It would have been easy for Richardt & Mejer to source a stock stick handset and dump it in the watch, but the stick/syringe hybrid is another little detail that is done well in the Signature.

In terms of lume, the hands and the four cardinal applied indices have a lume coating. It’s no Seiko Monster and I wouldn’t take it diving (the watch is rated to 5ATM), but it is sufficient to tell the time at night, which is enough for most.

A simple printed logo under 11 – 1 is the only other design detail of the dial. 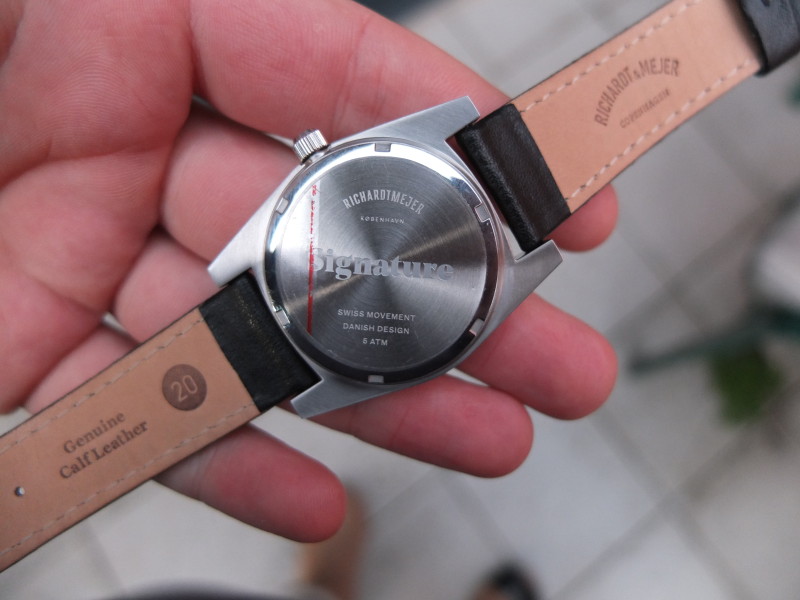 The Signature is fitted with a Ronda (calibre 515) quartz movement, which is perfect for the watch. As much as I love a mechanical watch, this same watch could not have been made with a mechanical movement: 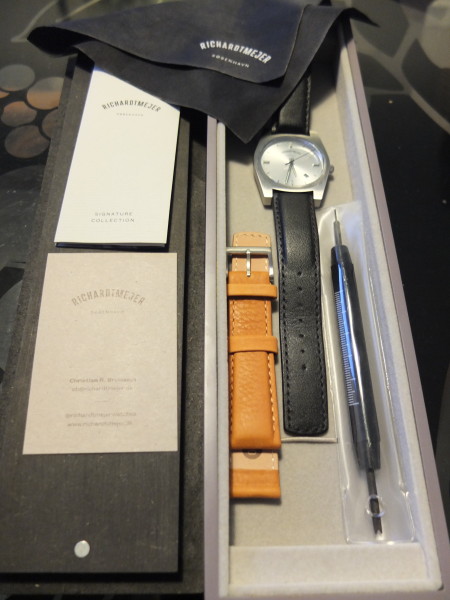 The lugs run 20mm allowing for a virtually unlimited variety of strap choices. Our review variant is shipped with both a black and tan/brown leather strap included. Both straps have colour matched stitching and sizeable padding that tapers. They run a bit stiff at first (likely a result of the padding) but have worn in nicely.

I admit, if I had my way, the case would have drilled lugs or cutouts at the underside of the lugs to facilitate strap changes. Currently the lugs are a large slab of stainless steel and strap changes are not easy. The watch ships with two straps, which aids the versatility of the watch, but a little assistance facilitating the changes would be welcome. Alternatively, a quick release strap would have the same effect without needing case alterations.

Usually I take little interest in a watch’s packaging (you can’t wear a box), but I’ll make an exception for the Signature. It comes in a two toned wooden box that is padded on the inside and contains elastic straps to lock the watch in place. Also inside the box is a polishing cloth and a strap changing tool. It’s a little thing (my watch boxes sit largely unused), but it shows a welcome attention to detail that is present in the design and execution of the Signature.

The polishing cloth is a quite welcome addition, since the flat surfaces of the case are a bit of a fingerprint magnet.

With simple watches, a brand only has a few elements where it can depart from the rest and realise its design vision. I’m glad to say that the Richardt & Mejer really hit the mark with those little details on the Signature, from the interesting handset to the eye-catching cardinal applied indices. The watch is simple and eminently legible and is charming with an original design vision.